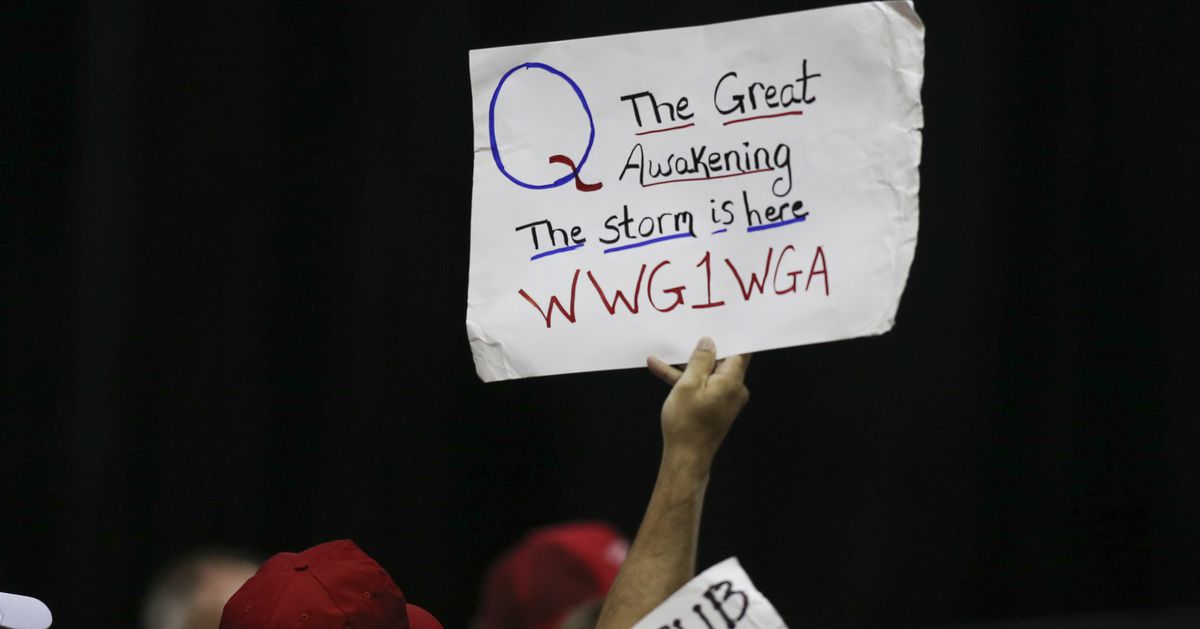 “Where we go one, we go all” is a frequent slogan of adherents to QAnon, a fringe conspiracy theory that posits the existence of a pedophilic “deep state” working against President Donald Trump.

Now, it looks like at least a couple of them could be going to Washington.

On Tuesday, restaurateur Lauren Boebert defeated five-term incumbent Rep. Scott Tipton for the GOP nomination in Colorado’s Third District. Boebert is a conservative gun rights activist who touts her support for Trump, as well as her belief in “personal freedom, citizen rights, and upholding the Constitution of the United States,” on her campaign website.

She’s seemingly also on board with QAnon: In May, she told far-right personality and QAnon supporter Ann Vandersteel that the theory isn’t really her “thing,” but then later added, “I hope that [Q] is real, because it only means America is getting stronger and better and people are returning to conservative values.”

And in the traditionally Republican Colorado Third District — Tipton won by about 8 points in 2018 — Boebert is also the favorite to win in November.

If she does, odds are good she won’t be alone in her familiarity with QAnon when she gets to Congress. Marjorie Taylor Greene, a Georgia Republican, almost won her primary outright in Georgia’s 14th District, which lacks an incumbent, and she’s on track to win again in the August runoff. Greene is even more open in her support for the conspiracy theory: In a 2017 video discussing it — one of several first uncovered by Politico — she told supporters that “there’s a once-in-a-lifetime opportunity to take this global cabal of Satan-worshipping pedophiles out, and I think we have the president to do it.”

Boebert and Greene are the two QAnon-supporting candidates most likely to make it to Congress this November, but they’re not the only ones who have a shot. According to Media Matters, there are at least eight other QAnon-friendly candidates for Congress who have already won their primaries, as well as one more (in addition to Greene) who’s headed for a runoff.

It’s a surprising number of people to have successfully running for office while embracing an objectively wild conspiracy theory. But maybe not that surprising — after all, one of the president’s sons posted a QAnon graphic on Instagram just last month.

According to Travis View, a QAnon expert and co-host of the podcast QAnon Anonymous, part of it is just politics, albeit a particularly Faustian variety. The fanatical dedication to QAnon that characterizes many of the conspiracy’s acolytes turns out to be very effective when it comes to spreading a particular candidate’s message — or, at least, it is if they think a candidate is on their side.

Of Boebert, View says, “I feel like she’s being very crafty in that she seems aware of what she needs to say in order to give enough wink and acknowledgment to the QAnon community without out-and-out endorsing it.”

Boebert has continued to walk that fine line since her win on Tuesday. “I’m glad the [inspector general] and the [attorney general] are investigating deep state activities that undermine the President,” she said in a statement to Vox. “I don’t follow QAnon.”

But Graham Brookie, an expert on disinformation and the director of the Atlantic Council’s Digital Forensic Research Lab, says that whether candidates like Boebert officially lay claim to the conspiracy theory doesn’t matter too much.

“She may not identify as an adherent of QAnon conspiracy theories,” Brookie, a native of Colorado’s Third District, said in an interview with Vox, “but she has certainly amplified them provably, and the impact is the same on the audience.”

This is my home.

I also happen to run a nonpartisan center dedicated to identifying & explaining disinformation.

So let me explain this: Lauren Boebert is an unabashed conspiracy theorist, who spreads QAnon & is unfit for elected office. https://t.co/CZX86BYSbR

QAnon supporters — and believers of other conspiracies — are “primed to believe in code words and secrets,” as Vox’s Jane Coaston explained:

Not all QAnon-friendly candidates are like Boebert, though: Some exist much closer to the Greene end of the spectrum.

Specifically, View describes some QAnon supporters as “pragmatic” in their embrace of the conspiracy theory: “cynical grifters who see the QAnon community as a bunch of people who can be exploited for money or online audiences,” or even to win a Republican primary.

But in other cases, he says, “you see people who are genuinely radicalized by the QAnon story.” For example, View says, Jo Rae Perkins, who won the Republican nomination for Senate in Oregon, appears to be a “true believer”; she even made explicit reference to Q in her victory speech this May.

When it comes to the recent surge in QAnon-supporting candidates, most of their voters — and there are about 600,000 of them, according to a calculation by the Washington Post — aren’t voting for Q directly. In fact, just over three-quarters of Americans have never heard of QAnon. But while QAnon encompasses a lot of truly wild conspiracies, at its heart, View says, is “pervasive institutional distrust”: a belief that “the whole of mainstream media, the whole of the political system is entirely, irredeemably corrupt.”

And in the era of Donald Trump, that kind of populist messaging plays really, really well with the Republican primary electorate. (Not only with Republicans — as the Atlantic’s David A. Graham points out, voters of all stripes can be conspiracy-prone, and our current political environment isn’t helping. But the Satanic-pedophilia stuff is basically only a thing in on the extreme fringes of the GOP.)

Tipton, the Republican incumbent Boebert defeated, was endorsed by Trump — but Brookie argues that that endorsement was in name only.

“From an ideological standpoint, candidates like Boebert tend to play to the kind of basest parts of Trump’s base, which his rhetoric has consistently promoted, endorsed, amplified,” Brookie said. “So a victory of a candidate like Boebert can’t be seen as anything other than an extension of Donald Trump’s influence on the Republican Party.”

In other words, elements of the worldview underpinning QAnon don’t look all that different from what’s coming from the top of the ticket — which would explain the prevalence of QAnon signs at Trump rallies.

The result is a fairly widespread acceptance of — or at least an openness to — it and other conspiracy theories. For example, a Yahoo News/YouGov poll in late May found that “half of all Americans who name Fox News as their primary TV news source believe the conspiracy theory (that Bill Gates wants to use mass vaccination to implant microchips), and 44 percent of voters who cast ballots for Trump in 2016 do as well.”

“Half of all Americans who name Fox News as their primary TV news source believe the conspiracy theory (that Bill Gates wants to use mass vaccination to implant microchips), and 44 percent of voters who cast ballots for Trump in 2016 do as well.”https://t.co/7edbgD0wZF pic.twitter.com/dPkfg9PQYy

As NBC’s Ben Collins points out, that’s not a theory that Fox ever boosted. But the channel has “spent the pandemic sowing constant distrust in disease experts, leaving a gaping hole for answers that’s been filled by opportunistic, algorithm-gaming grifters online.”

And it’s not too much of a jump from a conspiracy theory about Bill Gates and vaccines to QAnon. According to View, QAnon functions as “a meta-conspiracy theory that can connect with every other sort of conspiratorial narrative,” however out there it might be.

Republicans also haven’t been especially proactive in condemning QAnon when it crops up in candidates. After Boebert’s win, the National Republican Congressional Committee reiterated its support for her. When asked by the Democratic Congressional Campaign Committee if it intended to disavow Boebert, the NRCC said in a statement shared on Twitter by Huffington Post reporter Kevin Robillard that “we’ll get back to you when Cheri Bustos and the DCCC disavow dangerous conspiracy theorists like Nancy Pelosi and Adam Schiff.”

View says that failure to forcefully condemn the conspiracy theory means that QAnon is likely to stick around in the Republican Party: “Anything short of a clear, forceful repudiation,” he said, “they will take as acceptance.”

It’s unclear how Boebert’s hardline populism and flirtations with QAnon might hold up come November, though. It worked out well for her in the primary — she becomes one of just a small handful of candidates to successfully oust an incumbent of their own party this cycle — but Anand Sokhey, a professor of political science at the University of Colorado Boulder, isn’t so sure the same will be true in the general election.

“I think it’s very competitive now,” Sokhey said. “It looks like it’s certainly possible for the Democratic candidate, Diane Mitsch Bush, to run strong in that district where we normally wouldn’t have thought it would have been possible.”