The new Hunger Games prequel is introspective and dark as hell 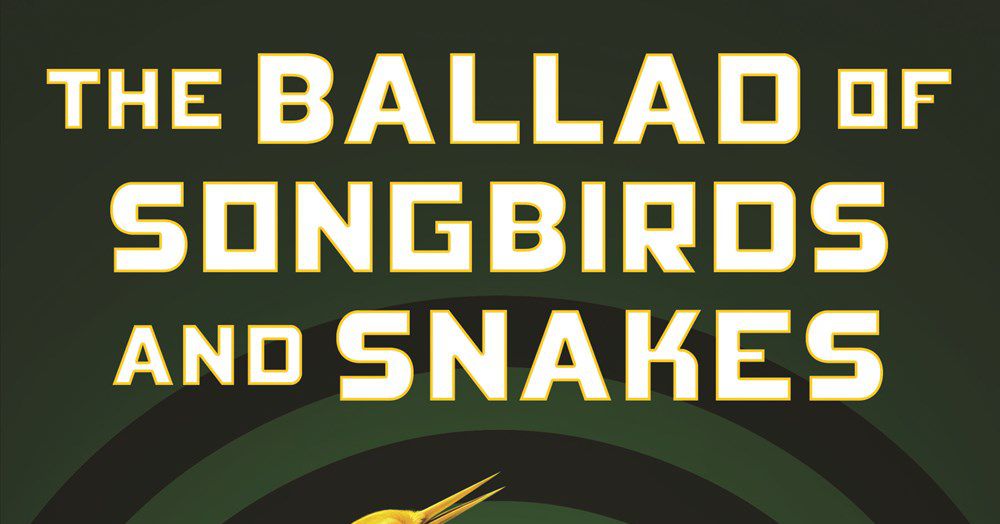 As our present moment grows to feel more and more apocalyptic — pandemics, climate change, murder hornets, plants that cause third degree burns and also blindness — it can be oddly comforting to escape to a fictional dystopia. In a way, it’s as though we’ve been preparing for this eventuality for decades. Pop culture is America’s subconscious, and ours has been dreaming apocalyptic dreams.

The latest fictional dystopia is also an old one. This week sees the publication of Suzanne Collins’s The Ballad of Songbirds and Snakes, a prequel to her wildly successful Hunger Games trilogy about a dystopian world in which children are forced to battle to the death on reality TV. The new book is billed as an origin story for Coriolanus Snow, the future president of Panem and the chief villain of the original trilogy. And it fulfills that function capably enough, although it fails to ever quite reach the adrenaline-pumping urgency of the first trilogy.

But more pressingly, The Ballad of Songbirds and Snakes is an origin story for the Hunger Games themselves. It tells us how and why they came to be in the first place.

The Hunger Games are all about bread and circuses. The Ballad of Songbirds and Snakes reveals the origin of the circus part.

The Ballad of Songbirds and Snakes begins with the 10th Hunger Games, 64 years before Katniss Everdeen will volunteer for the Games that kick off the central trilogy. And at this point in time, the Games are comparatively minimalist.

The Games still, at this early stage, feature 24 children, a.k.a. tributes — two from each of the 12 impoverished districts that rebelled against the wealthy Capitol of Panem — who are thrown into an arena with a handful of weapons and forced to fight to their own televised death. But as we enter the story, the arena isn’t the vast and ever-shifting outdoor landscape that Collins put to such memorable use in the first trilogy. (Collins has never been strong on prose, but she’s fantastic at setting. I’ll never forget the choking wilderness of the forest from The Hunger Games, or the eerie clock-shaped arena of Catching Fire.)

In The Ballad of Songbirds and Snakes, the arena is a literal arena. It’s a sports stadium, and the luckless tributes try to hide from each other in the stands.

The cameras haven’t yet begun to follow the tributes from place to place to pick up every juicy minute of the Games. There aren’t even many microphones, so that when one tribute happens to fall and break his leg next to a mic, the watching audience is startled by crack of his bones. They haven’t heard any of the previous carnage.

But not that many people enjoy watching the Games yet, even within the Capitol. They don’t doubt the necessity of the Games — the war between districts and Capitol is only 10 years gone, and everyone remembers the deprivation and the horror of the violence and is eager for it to be avenged on their enemies — but they find the Games dull. They don’t particularly care for the tributes or whether they live or die. For Capitol citizens, there’s really nothing that interesting about watching a bunch of impoverished children hack each other to bits and/or starve to death.

To pep up the proceedings in this 10th year, 24 students from the Academy — a high school for the children of the Capitol elite — will be guiding the tributes as mentors. The idea is that they can help inject some fresh interest, under the symbolic guise of unity between Capitol and districts. And among those 24 elite students is 18-year-old Coriolanus Snow, future villain.

At 18, however, Coriolanus is nothing but a striver, networking and brown-nosing with abandon. The Snows lost everything in the war except for their old family name and reputation, and Coriolanus plans to reedeem it with the splendor of his achievements. The mentorship program will be the first step in a series of professional glories for him: He’ll guide his tribute to victory, be awarded a scholarship to study at the University, and then embark on a career in politics that will culminate in his own presidency. He’ll restore honor to his family name. His aging grandmother and his beloved cousin Tigris (old fans will remember her from Mockingjay) will be able to lead lives of comfort and ease.

So it puts a major hitch in Coriolanus’s plans to find himself saddled with the girl from District Twelve as his tribute, Lucy Gray. She’s from the poorest district, and undernourished, which makes her unlikely to win. That means trouble for Coriolanus.

But after all, Coriolanus reasons, pulling an unlikely win out of a dark horse contestant will just make him a more attractive figure to all the career politicians who care about the Games. And even if Lucy Gray isn’t particularly strong or deadly, she has personality. She’s a performer who wows the crowd at her reaping by singing a folk song to the watching audience. People find her charming. Even Coriolanus does.

Gently, Coriolanus begins to pitch ideas to the Gamemakers that work to Lucy Gray’s advantage. What if the audience got to know the tributes better through interviews, so that they’d have a reason to care about the fights? What if viewers could bet on tributes, to give them a rooting interest? What if they could sponsor their tribute of choice?

And so we watch the Games become a spectacle, because it suits Coriolanus’s purposes, and because his bosses agree that it’s an effective way of getting the Capitol citizens more invested in the fights. But it takes much longer to understand why the Games exist in the first place.

The original Hunger Games trilogy was part action series, part political allegory. In those books, the government forced children to kill each other with spectacle because that is what we do in real life to our children, under our present government. Collins came up with the idea for the series while flipping back and forth between Iraq War footage and episodes of a reality TV talent show. The series became a motif during the Ferguson protests against the police shooting of 18-year-old Michael Brown. American culture is full of the spectacular and televised killing of teenagers, and all Collins really did in her dystopia was dial the ages down a couple of years.

The Ballad of Songbirds and Snakes digs a little deeper. It’s interested not just in the fact of the murder of children, but in the why of it, and it primes the readers to begin to consider the question with epigraphs from the philosophers Hobbes and Locke and Rousseau. “Something is significantly wrong with a creature that sacrifices its children’s lives to settle its differences,” Katniss says at the end of Mockingjay. In The Ballad of Songbirds and Snakes, Coriolanus begins to investigate exactly what that something is.

He’s guided in his investigation by Dr. Gaul, the menacing Head Gamemaker who keeps popping up out of nowhere to torture an animal, say something sinister, and disappear again. Gaul believes the Games are necessary to keep order in place and to prevent human beings from devolving into an animalistic state of nature. She takes a special interest in teaching Coriolanus exactly why that control is necessary, and why she believes the Games are essential to it.

This book is President Snow’s origin story. That doesn’t mean he comes off as sympathetic.

When the announcement first came that The Ballad of Songbirds and Snakes would be Snow’s origin story, fans reacted with outrage. Were they really going to be asked to sympathize with a fictional fascist? Would Collins try to justify all the atrocities we knew he was going to commit by giving him a tragic past, Anakin Skywalker style?

But nothing of the sort happens in this book. Collins doesn’t even grant Coriolanus the intimacy of narrating the book in the first person, the way Katniss does in the original trilogy. Instead, we stay in Coriolanus’s head but at the slight remove of a close third person, the better to watch a stone-cold snake at work.

Coriolanus is a player from the beginning, analyzing every single person he meets for their value to his prospects and then either abandoning them or relentlessly buttering them up. His tribute Lucy Gray thinks he’s a good person because he treats her like a human being, but we readers know he does so only because he thinks he’ll have a better chance of engaging the audience if he convinces them that Lucy Gray is closer to a real human being than the other district kids are. The rest of them he considers to be little better than animals.

And as Coriolanus begins to grow gradually more and more fond of Lucy Gray, Collins leaves us little space to imagine that his interest in her is in any way based on a belief in her inherent human worth.

All of this calculation and coldness makes Coriolanus a tricky protagonist. Collins has no interest in making him sympathetic or a figure to root for, but she does have to maintain the reader’s interest in him all the same. Mostly, she does that by giving Coriolanus a sense of humor. The kid’s a slimeball, but he knows tacky when he sees it, and one of the deep pleasures of this book is watching his unimpressed reactions to the sparse pageantry the Capitol has built around this early version of the Games: At one point the presenter brings in his pet parrot and, when it refuses to talk, mimes talking for it. Coriolanus, gamely thumbs-upping the camera, thinks dark thoughts.

But while Coriolanus can be compelling, he never resolves into the kind of iconic survive-at-all-costs protagonist that Katniss was. And in general, The Ballad of Songbirds and Snakes lacks the relentless urgency of the original trilogy.

In part, that’s because we’re not in the arena ourselves this time. We’re in the studio with the 24 Capitol kids who run the mentorship program, watching the Games with them. Thematically, that’s a strong choice that hammers home both Coriolanus’s complicity with the system and our own: If you’re reading this book, there’s a solid chance that you’re much closer to being part of the corrupt and decadent Capitol than you are to being one with the impoverished districts.

But on a storytelling level, it means we never feel the adrenaline jolt of our narrator battling for her life against insurmountable odds. We just follow our snake-like protagonist as he watches other people battle for their lives, across the slight and chilly remove of a third person narration.

So in the end, The Ballad of Songbirds and Snakes isn’t quite the moment-defining achievement that the original trilogy was. It’s more of a curiosity, a cold-blooded philosophical enquiry that adds depth to the original three books but is not essential reading. It’s a nightmare from which it is all too easy to wake up.