“It is an official death sentence for Hong Kong:” China moves to pass national security law 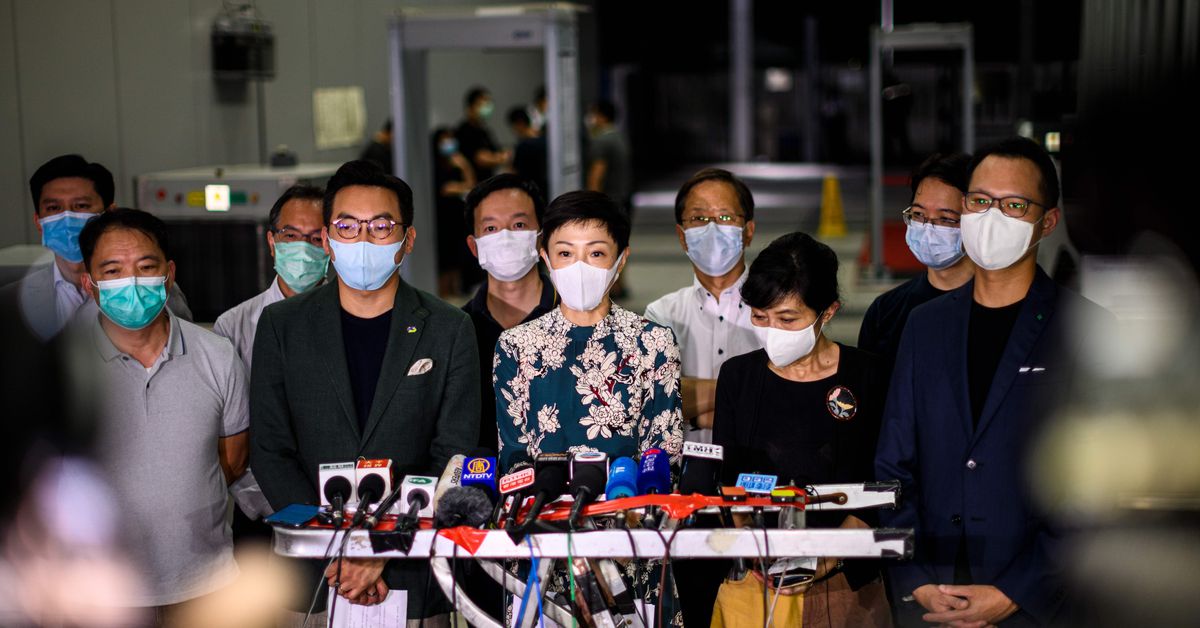 As Hong Kong approaches the anniversary of its massive pro-democracy protests, China is moving to impose a sweeping national security law that could directly undermine Hong Kong’s freedoms and special status, and inflame tensions after a year of political turmoil.

The National People’s Congress — a rubber stamp for the Chinese government — is set to pass legislation that is intended to curtail foreign interference or activities that undermine the state. That could directly target the antigovernment activists who have challenged Beijing’s authority. The Chinese government has tried to blame outsiders, including the US, for fomenting the pro-democracy movement in Hong Kong.

Hong Kong is supposed to be governed according to the “one country, two systems” rule. The “one country” part means it is officially part of China, while the “two systems” part gives it a degree of autonomy, including rights like freedom of the press that are absent in mainland China. China is supposed to abide by this arrangement until 2047, but it has been eroding those freedoms and trying to bring Hong Kong more tightly under its control for years.

Last spring, Hong Kong’s legislature tried to pass an extradition bill that critics feared would allow the Chinese government to arbitrarily detain Hongkongers. That ignited massive protests, leading to months of unrest that sometimes turned violent. The bill was withdrawn, but the demonstrations continued, as the fight transformed into a larger battle to protect Hong Kong’s democratic institutions.

The coronavirus pandemic and the social distancing measures required to slow its spread put a lot of that public activism on hold. But Beijing didn’t forget — and has used the pandemic to further crackdown on the pro-democracy movement, including by arresting pro-democracy lawmakers in April.

Now, China has introduced this national security law, which is a much more direct step toward what Beijing has been trying to accomplish for years: one country, one system.

“It is an official death sentence for Hong Kong, it’s nothing less than that,” Alvin Y. H. Cheung, an affiliated scholar at NYU’s US-Asia Law Institute, told me.

The full implications of Beijing’s moves are still unclear, including how it will be implemented and what the political and economic fallout for Hong Kong will be.

Pro-democracy advocates have denounced the legislation. Beijing’s attempts to interfere in Hong Kong’s affairs in the past— the extradition rules being one, but far from the only, example — have fueled widespread resistance.

Samuel Chu, the managing director of the Hong Kong Democracy Council, a US-based pro-democracy group, said China’s decision to step in directly shows it has been unable to fully reign in Hong Kong. “I think that this — not only in a short-term way — will antagonize the pro-democracy movement even more, and would generate a kind of response that China is not prepared [for].”

China has, at least rhetorically, honored the “one country, two systems” rule. In practice, it has sought greater and greater control over Hong Kong.

But Beijing has also had to tread carefully, as some of its boldest moves have been met with resistance. That includes a 2003 attempt to pass a national security law under Article 23 of Hong Kong’s Basic Law (the closest thing Hong Kong has to a constitution). This would have also established rules against subverting the state and foreign interference, but the law got shelved after mass protests.

And in 2014, when Beijing reneged on its promise to give Hong Kong universal suffrage, the Umbrella Revolution erupted. And then, of course, there was last summer, when Hong Kong’s legislature tried to pass that controversial extradition bill, and months and months of demonstrations ensued.

For a long time, China and pro-Beijing lawmakers in Hong Kong continued to dream of passing a national security law under Hong Kong’s Article 23, and Beijing had been prodding Hong Kong in recent weeks to take it up again.

But now, China is dispensing with all that, and doing it all itself.

Ho-Fung Hung, a professor of political economy at Johns Hopkins University, said Beijing may have stepped in directly because it learned a lesson from the 2019 anti-extradition bill protests, which ultimately defeated the legislation and embarrassed China.

“It will be a huge embarrassment if it tried to push through the local legislature that is eventually shelved because of local protests,” Hung said. “Beijing didn’t want to reach that event. Beijing even didn’t trust the local legislature, so it adopted this kind of extreme route to directly legislate.”

“And it is a big risky move,” he added, “because it tears down all the remaining pretension of ‘one country, two systems.’”

China’s dramatic escalation also comes as the whole world — and the media, which had devoted a lot of attention to the Hong Kong protests — is distracted by the coronavirus pandemic, and as Hong Kong itself is under social distancing restrictions. The imposition of those rules gave Hong Kong some cover to quell protests (while also helping to successfully control the outbreak there).

But China had long made it clear it had no tolerance for the protesters, or even more peaceful challenges to its authority, such as when pro-democracy candidates in Hong Kong dominated local elections. And now, China has at least hinted at how it plans to consolidate its control.

“It is such a big development because it’s basically Beijing asserting more fervently that ‘no, we actually have this type of authority that we can impose on Hong Kong,’” Jacob Stokes, a senior policy analyst for China at the US Institute of Peace, told me.

It makes even the nominal idea of “one country, two systems” somewhat farcical, he added. “China’s sort of turning Hong Kong from what it was before and to, in a way, just another city in China,” Stokes said. “And that’s what the protest movement is trying to avoid.”

What comes next? No one knows.

Though China’s planned action makes it clear that it has basically decided stop pretending that it cares about “one country, two systems,” its officials are still trying to frame this rhetorically as strengthening and protecting Hong Kong’s government.

“We will ensure the long-term stability of ‘one country, two systems,’” Wang Yang, head of the Chinese People’s Political Consultative Conference, said, according to the Washington Post.

What this means for Hong Kongers is still uncertain. The law has not yet been approved, and the details are still fuzzy. According to the New York Times, Chinese officials have indicated the law is targeting foreign influence that’s led to unrest in Hong Kong. But that is largely disinformation; China has blamed outsiders for fueling violence in Hong Kong to deny the grassroots resistance.

The law could have the chilling effect on dissent that China desires, snuffing out all but the most extreme protests. The opposite also seems possible: that China’s actions — proof positive of why many Hongkongers felt they had to continue to protest — might escalate tensions even more.

But China’s incursions may make it harder for pro-democracy Hongkongers to advocate for a more moderate stance. “They will eventually be pushed to become either totally pro-Beijing agenda, or pro-confrontational protesters,” Hung, the Johns Hopkins professor, noted. “It’s the disappearance of the middle ground and really will become more polarized.”

Many of Hong Kong’s protesters were young, fighting to preserve what freedom they had left. “All the things that were ostensibly promised are, as it turns out, just no longer there,” Cheung said. “At this point, what do they have left to lose? It really is a powder keg now, and I dread to think how this will play out.”

In China, the event has been scrubbed from history. But in Hong Kong, thousands memorialize it. Hong Kong’s social distancing measures banning mass gatherings are in effect until June 4, though organizers have called on Hongkongers to “be water,” a reference to strategy the leaderless protesters used in Hong Kong throughout 2019, and are calling for Hongkongers to find other ways to recognize the day.

Chu, the managing director of the US-based Hong Kong Democracy Council, said activists have recognized this could be the first year China prevents this gathering from happening.

“Not allowing it to happen — again, I think it’s a lesson not learned well by the Hong Kong and Chinese government, that every time they prevent something this is exactly what galvanizes the grassroots.”

“It’s going to be a little bit of test to see the reaction,” he added, “but I think you will see the ongoing creativity and resilience continue.”

How will the rest of the world respond?

China’s actions will test the international community. The United Kingdom and the European Union both condemned the move

. US State Department spokeswoman Morgan Ortagus said in a statement to Reuters that “any effort to impose national security legislation that does not reflect the will of the people of Hong Kong would be highly destabilizing, and would be met with strong condemnation from the United States and the international community.”

A day before China announced this national security law, Pompeo had warned China against encroaching in Hong Kong, saying it could threaten the State Department’s review of Hong Kong’s special trade status, which grants exceptions on trade and commerce for Hong Kong that are not available to mainland China.

Last year, President Donald Trump signed the Hong Kong Freedom and Democracy Act, which requires the secretary of state to assess whether Hong Kong should still be granted special trade status under US law, based on whether Hong Kong’s government is still mostly autonomous and honoring the rule of law. The law also calls on the president to impose sanctions on officials who violate human rights in Hong Kong.

“Our decision on whether or not to certify Hong Kong as having ‘a high degree of autonomy’ from China is still pending,” Pompeo said at a press conference Wednesday. “We’re closely watching what’s going on there.”

Revoking Hong Kong’s status would be a dramatic step, with uncertain consequences. It would would undoubtedly send a strong signal to China, but it could have repercussions for both the US and Hong Kong. The US could lose tens of billions in trade, and it could jeopardize Hong Kong’s standing as a global financial hub, dealing another blow to the city.

The Trump administration has recently been pushing back hard against China as it is considering ways of punishing Beijing for its early mishandling of the coronavirus. That may motivate the US to take a tougher stance on Hong Kong. At the same time, China could retaliate for such a move, and Beijing may be betting that the US has too much at stake to take such a drastic step.

When asked about the proposed national security law on Thursday, Trump said he didn’t know what the US would do. “I don’t know what it is, because nobody knows yet. If it happens, we’ll address that issue very strongly.”

The US may not want to exhaust this leverage. It might also not also be ready to say that, at this point, Hong Kong’s autonomy is completely lost.